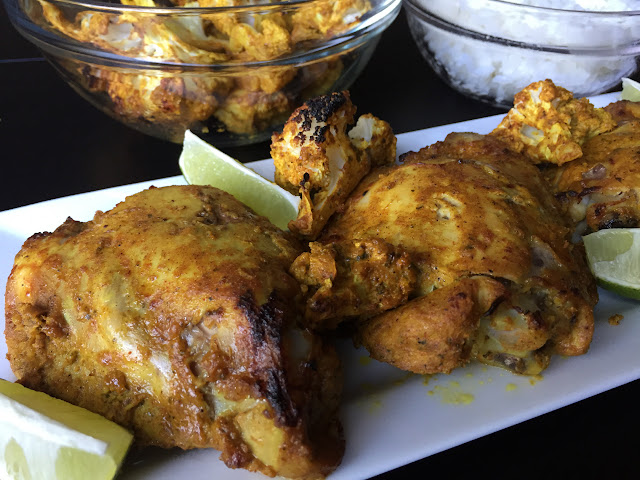 My travel ambitions have always been largely based on where I would most like to eat. So of course, stereotypical gastronomic destinations such as Italy and Paris have topped my list for many years. Recently, another country has been racing its way up that list, due in part to the fact that I am married to someone who frequently raves about both Malaysian cuisine and culture (having spent more than two years there) and also in part to a wonderful Malaysian cookbook I found that I cannot get enough of (and which you will certainly be seeing more of). 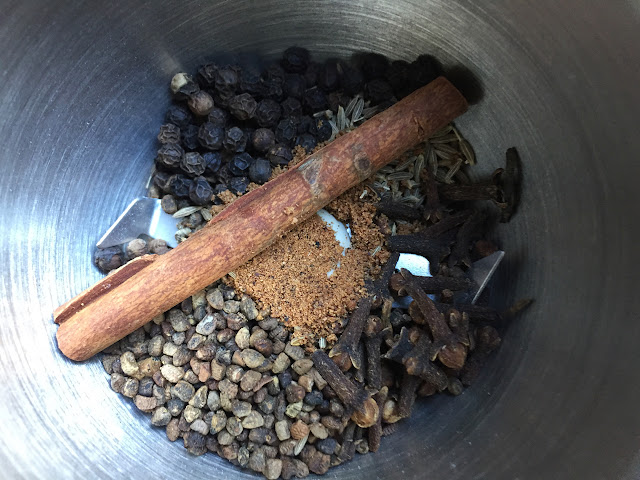 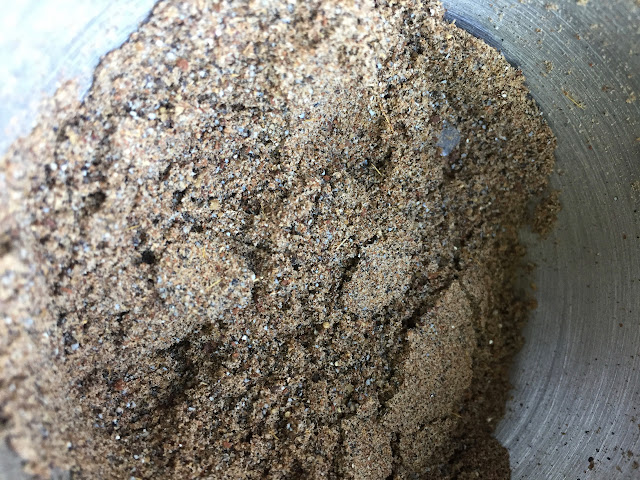 Malaysian cuisine is a happy combination of local ingredients and traditions and many international influences, including Chinese, Indian, and Thai, to name a few. This Malaysian version of a popular Indian dish is less spicy and more yellow-hued than the fiery red versions; it is also full of flavor and expertly adapted for success in the average American oven. The only time-consuming parts of the dish are also the most fun, chef-y parts: making the ginger-garlic-cilantro paste sent a wave of fresh, bright scent through my kitchen, and grinding spices for the garam masala made me feel culinarily unstoppable. Of course, you can go the more instant-gratification route and just buy pre-made garam masala and just grate/mince only as much ginger, garlic, and cilantro as you need. But if you invest in the extra prep work, you’ll enjoy bright, fresh flavors and also have extra ingredients on hand for the next time you make this or a similar dish. The marinade – oh, the marinade – is so deliciously spiced and salty and acidic that I wanted to eat it plain. (I know this because I did eat a little bit that hadn’t been contaminated.) This is what prompted me to add cauliflower to the recipe: I couldn’t bear to throw out the marinade leftover from the chicken, and throwing a vegetable on the sheet pan with the chicken meant I didn’t have to work very hard to get a side dish. I think cubed potatoes would also work fabulously in this role. Fresh lime juice is squeezed over the dish just before serving, being the perfect foil to the rich, aromatic, slightly fatty chicken. This is certainly a new favorite meal of mine. 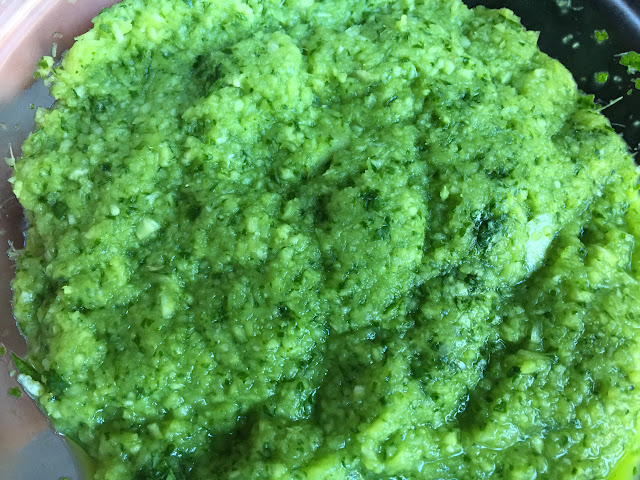 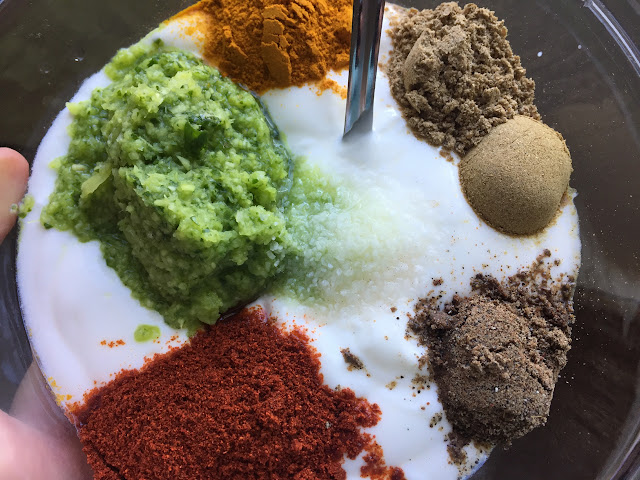 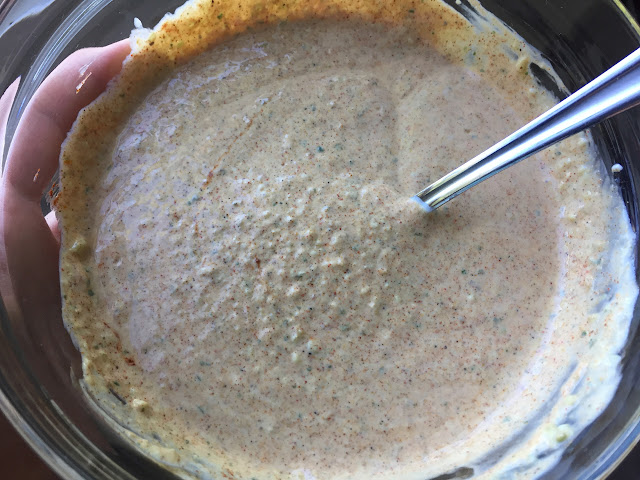 Now a word on marinating: America’s Test Kitchen recently shook up my culinary world by saying that marinating meat and poultry is ineffective. (Listen here, starting at 2:10, if you're as incredulous as I was: The Splendid Table Episode 632) In their testing, all those delicious fat-soluble flavors – spices, herbs, etc. – didn’t penetrate farther than the outer 1/10 inch of the meat after 18 hours of marinating. The exceptions are salt, which will work its way into meat fibers, both seasoning the inside and helping to retain moisture, and certain water-soluble flavors like garlic and onion, which can also travel farther inside than fat-soluble stuff. Another important thing to keep in mind is that acidic things like citrus juice and vinegar will dry out the meat because they denature the proteins, giving it a “cooked” appearance.

Why am I telling you all of this? Because the author of this recipe instructs you to marinate the chicken for 24-48 hours, you see. But after listening to America’s Test Kitchen debunk marinades, I was skeptical of this directive, and I decided to test it. I cooked half the chicken after just an hour or so of marinating, and I cooked the other half of the chicken 24 hours later. The chicken I cooked after 1 hour was very moist and tender, and the outside was flavorful, but the inside tasted a little bland. The chicken I cooked after 24 hours was significantly dryer – I even saw puddles of water in the marinade bowl when I pulled it out of the refrigerator. I believe this was due to the acid of the lemon juice. However, the salt had worked its way through the meat, making it nicely seasoned. And furthermore, the spices in the marinade had had a chance to “marry.” In short, this is what I believe would be my perfect solution: 24 hours before dinnertime, sprinkle salt all over the meat, and mix the marinade, with the salt reduced to compensate, in a separate bowl. Then, an hour or two before dinnertime, rub the lemon juice followed by the marinade into the chicken, and refrigerate until cooking. My theory is that this will lead to the best-seasoned, juiciest, most flavorful result. But if this sounds too fussy, just follow the recipe below, and you will still have a thoroughly delicious meal. 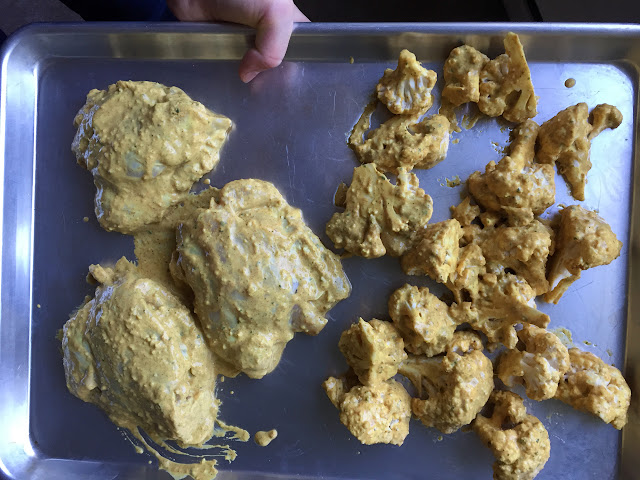 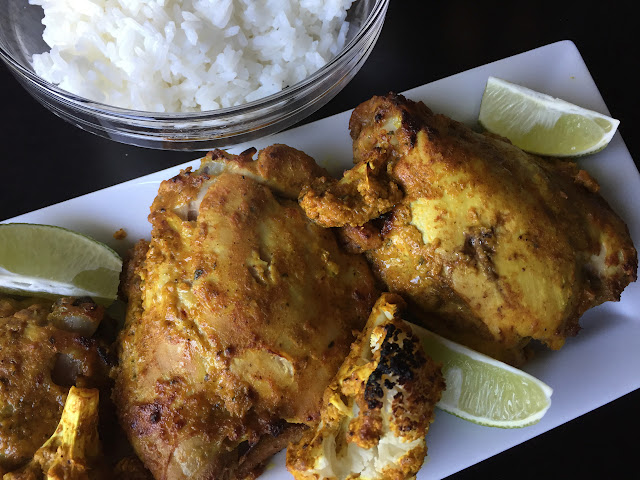 adapted from The Malaysian Kitchen by Christina Arokiasamy

Working very carefully, cut slits in the sides of each chicken piece, going deep enough to reach bone. Try not to sever the chicken meat (or anything else) in the process. Place the cut chicken pieces in a bowl, and rub all over with the lemon juice, then let sit for about 15 minutes while you make the marinade.

Combine all ingredients from yogurt through salt in a separate bowl. Mix together, and taste, adding more salt if desired. Pour the marinade over the chicken, and use your hand to coat each piece in the marinade, pushing some into the cuts made earlier. Cover and refrigerate until ready to cook, whether that is in an hour or two or up to 48 hours later – see note below.

Note: The author says to marinate for 24-48 hours. What I found is that the chicken will be juiciest if you cook it the same day. It will be better seasoned, but dryer, if you wait 24 hours or longer. If you want to avoid the catch-22, I would suggest sprinkling half the salt over the chicken the day before and mixing up the marinade with the other half teaspoon of salt also the day before. Store separately, covered, in the refrigerator. The next day, an hour or two in advance, rub the lemon juice over the chicken, let sit for a few minutes, and then rub the marinade over, and refrigerate until cooking.
Preheat the oven to 400 degrees Fahrenheit. Lightly oil a baking sheet (NOT non-stick; it may never be the same). Remove the chicken pieces, wiping off extra marinade with your hands, and place on the oiled baking sheet. If using cauliflower, add the chopped pieces to the remaining marinade, and rub to coat. Pull out the cauliflower, letting the excess drip back into the bowl, but don’t worry about removing too much. Place the cauliflower on the sheet pan next to the chicken. Roast for about 20-25 minutes, or until the chicken has reached an internal temperature between 155-160 degrees Fahrenheit. (165 degrees is the safe temperature for chicken, but it’s okay to have it slightly underdone at this stage because you’re going to broil it next.)

Place a rack about 5-6 inches under the broiler, and then turn the oven to Broil. Broil the chicken for 1-2 minutes on each side, until nicely browned. When you’re flipping the chicken, remove any pieces of cauliflower that look too torched to continue.

Chop all ingredients together in a food processor until a smooth paste forms. Store in a tightly sealed container in the refrigerator (for up to 1 week) or freeze (for up to 3 months). I like to freeze it in 1-Tablespoon portions in an ice cube tray, then transfer the portions to a plastic bag to keep frozen for later use.

Break or crush the cinnamon stick into smaller pieces. (I used a glass pie dish to crush it against a cutting board; any hard, flat object should work well.) Combine cinnamon with all other ingredients in an electric spice grinder* or a large mortar and pestle. Grind into a smooth powder, and store in a sealed container.


*Spice grinders and coffee grinders are kind of synonymous. I have a Capresso model, which I have been happy with, though I think I have dulled the blades with some overly ambitious projects. When the time comes to replace it, I plan to get this Krups Spice Grinder, which is well reviewed and very affordable.