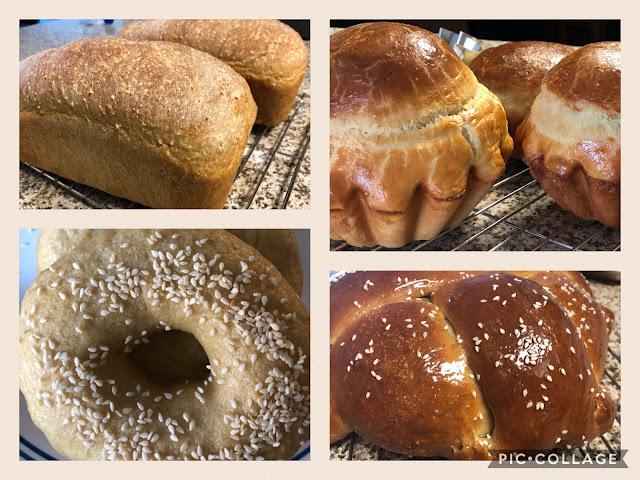 I know practically everyone in the country is on a bread baking kick right now. Well, I'm not immune to trends because I recently decided I wanted to bake my way through a book I have owned for about a decade: The Bread Baker's Apprentice by Peter Reinhart. It has been an exciting adventure, or "breadventure"if you will. Peter Reinhart uses a lot of preferments, or hydrated flour and yeast that has been allowed to ferment in advance of making the full bread dough recipe in which the preferment is used. This means it requires a bit more planning to make his breads, but they are more flavorful as a result. It has been really fun to prepare for "bread day" every week and even more fun to eat the results.

My plan is to post pictures of the breads I try, along with a brief description, rating (out of three stars), and comments. I will also make a note about the difficulty of the breads relative to other yeast breads, bearing in mind that most yeast breads are more complicated than quick breads and that Reinhart's recipes usually require the extra step of a preferment or soaker. So without further ado, here is Breadventures Month 1. 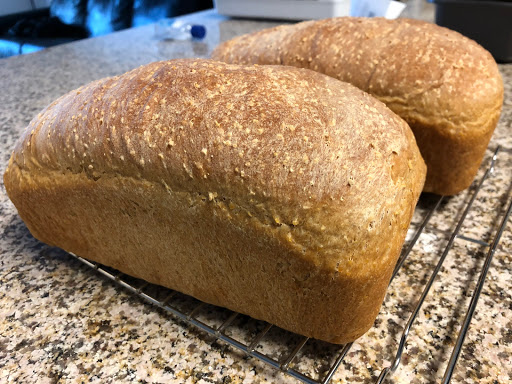 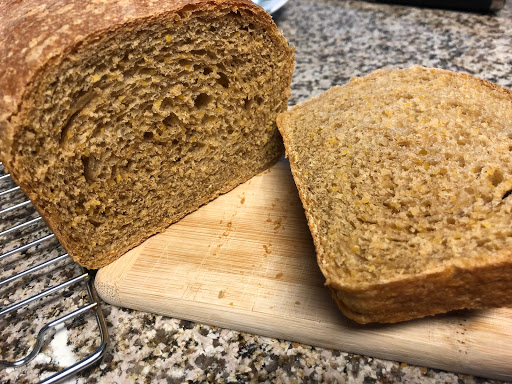 Description: This was a pretty basic white loaf baked in a tin but with the addition of coarse cornmeal (aka polenta) and molasses to the dough. It made for a mildly sweet bread that was nice and chewy with delightful crunchy bits of cornmeal that softened up over the following days.

Comments: I loved this bread. It was best texturally the day it was baked, but it made good toast and amazing French toast as it aged. I forgot to do the step of brushing with water and dusting with cornmeal before the loaves went in the oven, but I didn't feel like I was missing out. It did live in kind of a no-man's-land of being a little too sweet for sandwich bread yet being a little bit plain to serve on its own. Even so, I ate it with gusto, and I thought it was a delicious and non-intimidating start to my journey through the book. 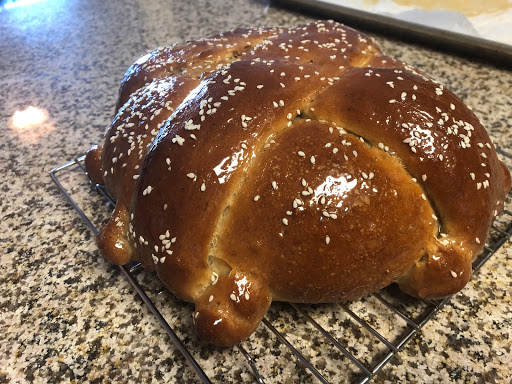 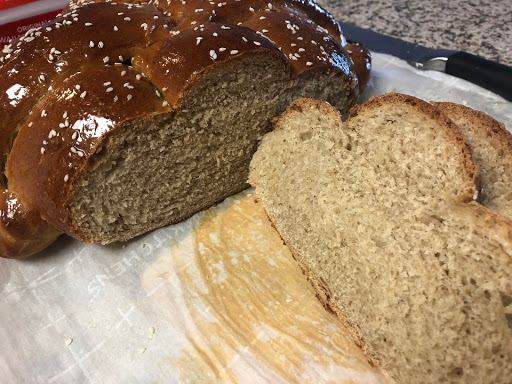 Description: The title encompasses a wide variety of breads with different add-ins (such as dried fruits, nuts) and shapes and for different occasions. Peter Reinhart gives a basic recipe as well as his versions of Christopsomos for Christmas and Lambropsomos for Easter. I made the basic version of dough and attempted to do the Christopsomos shaping in which 2/3 of the dough is formed into a large ball, and the remaining dough forms a cross over the top with each of the ends forming decorative scrolls. At any rate, the "basic" dough is still quite fancy with almond and orange extracts, spices, honey, and eggs. I found it deliciously aromatic, soft, and mildly sweet. I also opted for the syrupy orange glaze on top, which ramped up the sweetness and made the loaf significantly prettier.

Difficulty: intermediate, but easier or harder depending on the shaping you choose

Comments: I thought this bread was tasty, but I admit I was expecting it to be a bit sweeter and more punch you in the mouth with flavor, given all the spices and extracts that went in. I still thought it was good, and my husband thought it was delicious. I had a little bit of a hard time figuring out what the consistency of the dough should be. I had to add quite a bit of extra flour and then wondered if my dough was still too soft. The softness of the dough (and my inexperience) also made the shape of my bread very ugly; the design pretty much disintegrated as it proofed and baked. A little glaze and some sesame seeds made it look kind of pretty again at the right angles.

Would make again, but in a simpler shape. I'd like to try the dried fruit and nut mix-ins too. 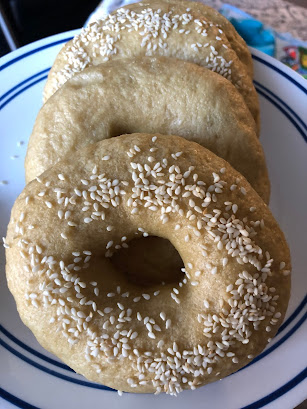 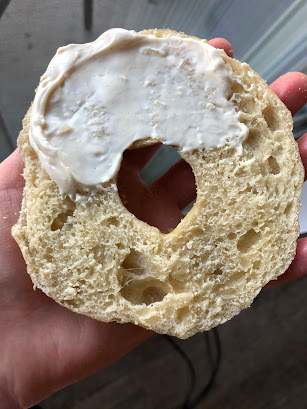 Description: Reinhart's version of the bagel is classic: boiled and chewy with an excellent flavor.
Rating: ⭐⭐⭐
Difficulty: intermediate
Comments: I decided to knead this one entirely by hand, hoping that it would help me judge the texture of the dough more easily, but I think it backfired. I ended up not adding the full amount of flour because it felt like my dough was already getting too dry, but my fears were unfounded. Instead, I think my dough was a little bit softer than intended, which meant my bagels got just a little wonky during the proofing and boiling. Honestly, though, I thought the texture for eating was perfect. They were still dense and chewy but not so dense that my jaw hurt. I had a lot of fun making these, and they went great with the impromptu maple almond cream cheese* I whipped up.
Would definitely make again! I'd love to try the cinnamon raisin version or do a cranberry version.
*Very approximate recipe: whip together 4 oz softened cream cheese, a couple drops almond extract,  some glugs (2-3 Tbsp?) maple syrup, and a dash of cinnamon. Stir in a tablespoon sliced almonds. 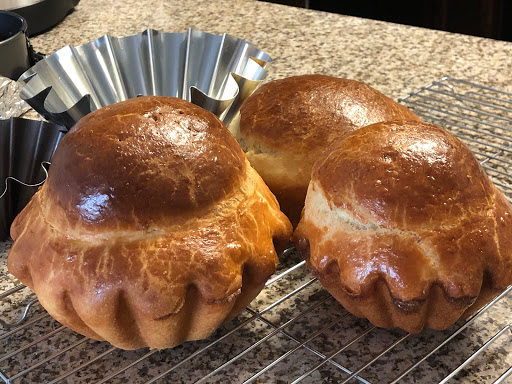 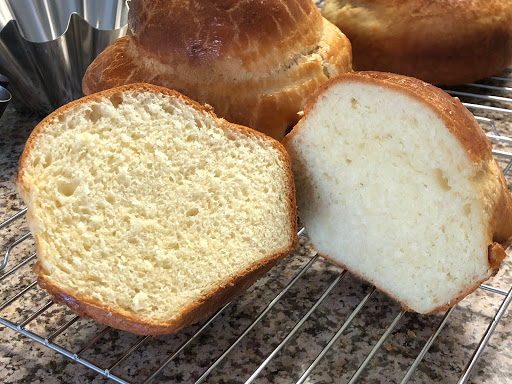 Description: A very buttery and eggy, almost cake-like bread. This recipe came with three variations: Rich Man's, Middle Class, and Poor Man's Brioche, with the butter getting cut in half with each succeeding version. I tried the Middle Class Brioche, with 50% as much butter by weight as flour. The high butter content shortens the gluten, which gives this bread its short, caky texture.
Rating: ⭐⭐⭐
Difficulty: easy, though shaping was a little bit fiddly
Comments: I almost gave this bread a 2-star rating, but not because the recipe isn't good. I was thinking brioche might just not be for me. Then I ate some more and changed my mind. This is delicious. It is an extreme amount of butter, and in general I prefer a bread with a stronger gluten network. However, this bread has a superb flavor and a lovely texture when I'm in the right mood. It's a little bit crispy/flaky on the outside from the egg wash, and the inside is plushy. There's a chance I would prefer the Poor Man's Brioche: with its lower butter content, the gluten would presumably be less shortened.
Would make again; Poor Man's next time! 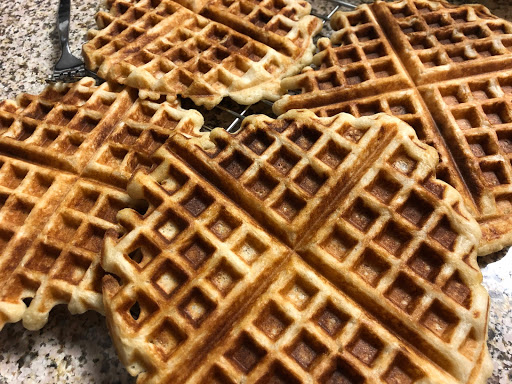 The Greek Celebration Bread this month used a preferment called a poolish. It was a mix of bread flour, water, and a small amount of yeast that you let ferment at room temperature for a few hours and then keep in the fridge for up to three days. Well, the bread only used a third of the poolish that I mixed up, so on day 3, I pretended that the poolish was a sourdough starter and made Sam Sifton's sourdough waffles with liberal alterations.** The batter smelled so weird I thought it was going to be a flop, but they turned out to be some of the best waffles I've ever made: crispy on the outside, bready/chewy on the inside, and not too sweet - they were amazing with some sweetened strawberry puree or maple syrup.
**I had between 1.5x and 2x the amount of poolish compared with sourdough starter called for in the recipe, so I multiplied all the ingredients by 1.5 except the eggs and sugar, which I doubled.