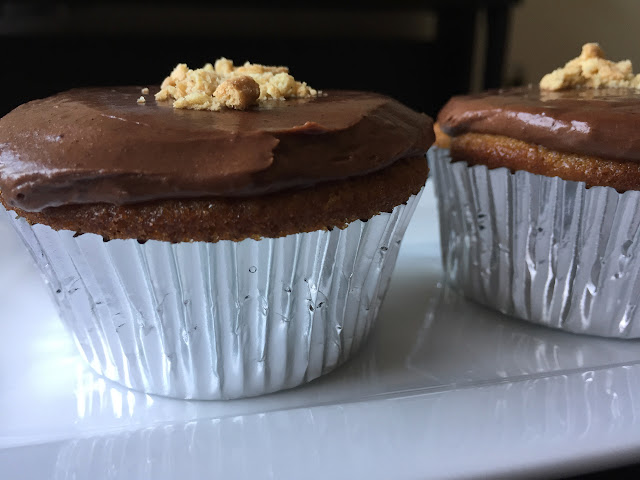 After performing the requisite field research, I have aptly concluded that I am a cupcake noob.
Case Study #1: Your standard cupcake tin contains twelve cups, but I had enough batter for thirteen cupcakes. “Wonderful!” I thought to myself, “I’ll just put the extra batter in a doubled cupcake paper and let it bake on the rack next to the others.” Fast-forward ten minutes: I peek in the oven, and the unfortunate thirteenth cupcake has shimmied its way between the wires of the rack to fall directly onto the heating element below. Smoke is beginning to issue from the oven, and I grab a pair of tongs to attempt a rescue mission, all the while hoping our smoke alarm doesn’t go off and having Neal A. Maxwell’s words of “too many anxious openings of the oven door, and the cake falls instead of rising” cycle vaguely through my mind in reference to all of the other cupcakes. 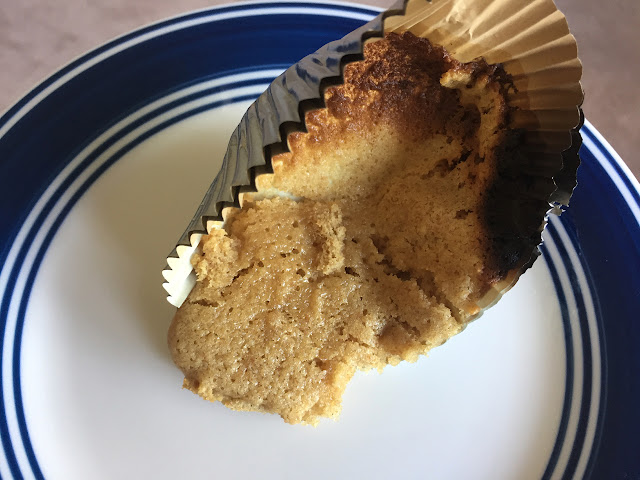 Case Study #2: I’m guessing that most people who are willing to blog about food would also be willing to spend $10 on a basic piping bag and some decorating tips. I, on the other hand, attempted to get by with cheap-o decorating tips from the grocery store placed in the severed corner of a no-name Ziploc-impostor plastic bag. The pressure of the frosting proved too much for the thin plastic, and the entire tip, along with a thick stream of frosting, came pouring out. “But this is supposed to work!” I thought, “Maybe it was just a fluke.” In the end, I had not one, but two ruined bags with icing smeared all over the interior. But hey, sometimes things just don’t go your way, and you’re forced to lick frosting from the inside of plastic bags. (All the while hoping your spouse doesn’t walk into the room to witness your shame.) 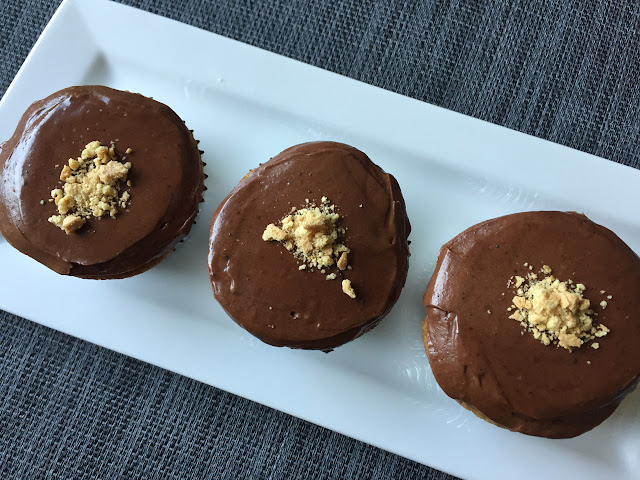 Long story short, despite my maladroit moments, these cupcakes are amazing. The frosting really does taste cheesecake-y. It’s rich and chocolaty, tangy from the addition of sour cream, and just sweet enough to be delicious but not make your teeth hurt. I loved it on top of these graham cracker cupcakes, which I adapted from Deb Perelman’s gorgeous Smores Layer Cake in The Smitten Kitchen Cookbook.* The cupcakes themselves pack a wonderful, warm Graham cracker flavor with a hint of extra spice. When you take a bite of the cupcake, a second wave of the cake flavor hits you just after the frosting disappears, and it’s superb. While I was delighted with this combo, I would also love to try this frosting on top of a good chocolate cupcake (of course) or on top of this same Graham recipe but with the Graham crackers replaced by Biscoff cookies. If you try the latter, I will gladly be your personal taste tester.

*I have had her book for 5 years now, and the more I cook from it, the more gems I find. And as much as I tell myself I won’t buy more cookbooks, her next one is coming out next month (!!!), so…we’ll see what happens. 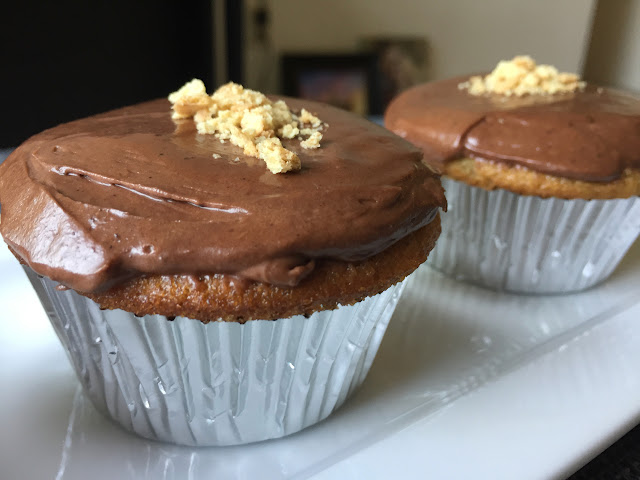 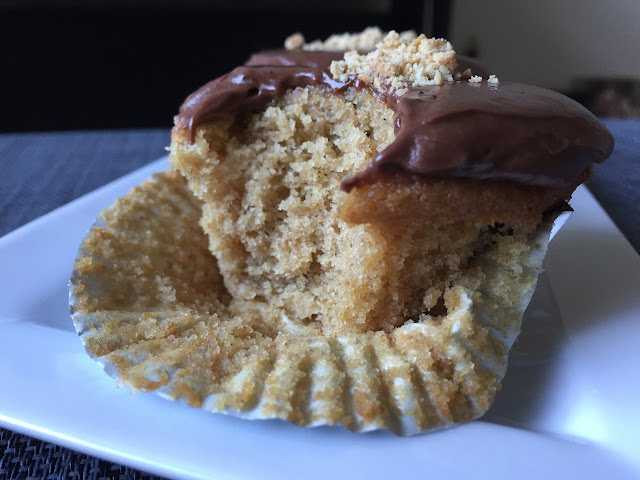 Melt the unsweetened chocolate in one of the following ways: 1) in a double boiler (or glass bowl set over a pot on the stove filled with 1 inch or so of simmering water), 2) in the microwave, stirring after each 30-second interval until just melted, 3) in a pan over LOW heat on the stove, stirring obsessively to prevent burning (this is my least recommended method). If the chocolate gets piping hot, it’s alright to let it cool for a minute or so before continuing, but don’t let it cool too much or else you risk having little bits that harden and refuse to incorporate with the cream cheese.

Beat the softened cream cheese and melted chocolate together in a mixer on medium speed with the whisk attachment. (If you don’t have a mixer, do the best you can with either a whisk or wooden spoon. It will still be delicious, even if it doesn’t get as fluffy.) Add the cocoa powder and first 1½ cups powdered sugar, ½ cup at a time. Mix slowly to incorporate. Add the sour cream, vanilla, and salt. Mix again to incorporate. At this point, taste the frosting. If you want it a little sweeter, add the extra ¼ cup of sugar. If you want it a little more tart, add more sour cream. Once the flavor is right, whip again at medium to medium-high speed until the mixture is smooth and lightens in color slightly. Store in refrigerator, and if needed, let soften slightly before spreading.

adapted from The Smitten Kitchen Cookbook

Preheat oven to 350 degrees Fahrenheit with the rack placed in the center of the oven. Line a cupcake tin with cupcake papers, or if you’re feeling gutsy and not lazy like I would be, grease and flour each of the cavities instead.

Whisk together the flour, graham cracker crumbs, baking powder, baking soda, and cinnamon. [Tip: you know how baking powder likes to clump? If you mix it separately with something granular, such as the salt or a little pinch of the sugar the recipe calls for, it will break those clumpy bits right up.]
In a separate mixing bowl, beat together the butter and both types of sugar until they are light and fluffy. Add eggs one at a time, and continue mixing, scraping the bowl between each egg added. Add the flour mixture in three parts, alternating with the buttermilk, in this order: flour mixture – stir – buttermilk – stir – flour mix – stir – buttermilk – stir – flour mix – stir. Scrape the bowl again to make sure all the ingredients are incorporated, mixing again just until combined if not.

Divide batter between 12 cupcake tins. If you have extra like I did, bake it in a sturdy dish like a greased and floured ramekin or add the extra batter between the other dozen cupcakes. (Or just treat all your non-immunocompromised friends to a taste of batter?) Bake for approximately 20 minutes, until a toothpick inserted in the center of a cupcake comes out clean (or with crumbs instead of batter). If your oven runs hot, plan to check them early. Let cool completely before frosting. Garnish with graham cracker crumbs, if desired.