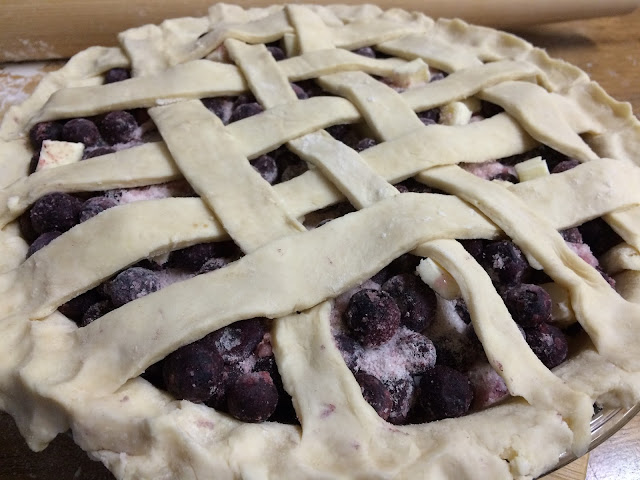 The line “I’m as normal as blueberry pie” in the South Pacific song always struck me as odd because for my first 18 years, I had never even seen blueberry pie let alone tasted it.  I figured since my encounters were so limited, it couldn’t be that normal of a dessert.  And since I don’t generally go out of my way for just “normal” desserts anyway, I didn’t feel like I was missing anything.

In the past few months, however, I have been developing a love for pie where once there was only lukewarm appreciation.  So at the height of summer, when blueberries were beautifully abundant, I decided it was time to try this apparent classic.

Now that I have cast off my ignorance and tried the pie, I understand the line of that song completely differently.  It isn’t that blueberry pie is boringly normal, but rather, it should be a normal part of everyday life because it’s too good not to eat regularly.  I have vowed to make the necessary lifestyle changes to make this possible. 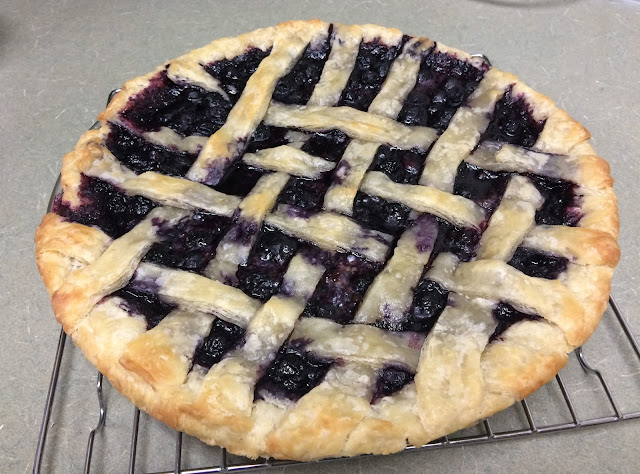 I have made this pie with both fresh and frozen blueberries.  The texture of fresh blueberries is a bit more tender and enjoyable, but the flavor of both is phenomenal – sweet and intensely blueberry-ish either way.  This pie has a small amount of cinnamon to add some depth without overwhelming the blueberries, and I like to add a tablespoon of lemon juice to make the flavor brighter.  (It doesn’t make the pie taste like lemon at all, though, in case you’re worried about offending lemon dessert-hating palates.)

The other nice thing about this pie is that it will get eaten so fast that no one will have time to judge your sloppy, asymmetrical lattice top crust….unless you take a picture of it and post it on the internet…. 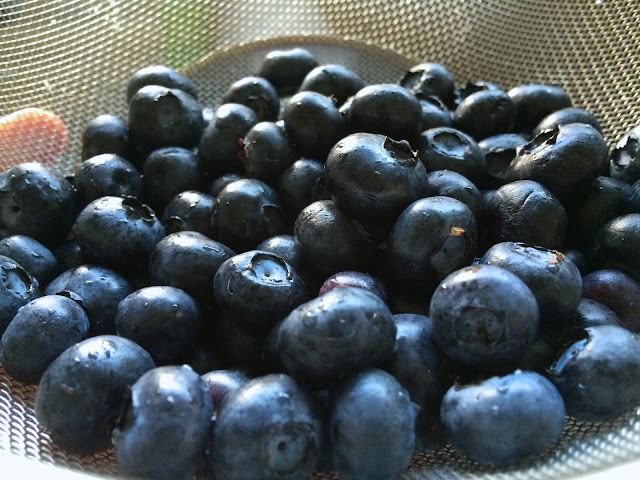 Fun Fact: Blueberries get their blue color from a class of pigments in their skin called anthocyanins. Not only do anthocyanins make pretty colors, but they also have antioxidant effects, meaning they destroy oxidizing agents in the body that can lead to heart disease and cancer. Maybe this will help with all of the butter you’re about to eat in the pie crust.

Mix flour and sugar together in mixing bowl.  Using a coarse grater, and working from square side of the stick of butter (you don’t want really long curls), grate both the sticks of butter into the flour/sugar mixture.  Avoid getting large piles of butter by occasionally moving the grater to different spots of the bowl and lightly tossing the already grated butter with the flour from time to time.  Make sure the butter is pretty evenly distributed through the flour – you’re aiming for pieces of butter the size of peas spread throughout. (You can always go with the pastry blender or food processor method if you prefer.)

Pour ½ cup of the cold water into the mixing bowl, and stir to combine.  Add additional water, 1 tablespoon at a time, until the dough is moist enough to clump together.  Divide the dough into two balls, then flatten lightly into discs, and chill for at least 30 minutes before rolling.  Makes enough for one double-crust pie.

Mix sugar, cornstarch, salt, and cinnamon together in a large mixing bowl.  Toss in the blueberries and lemon juice, and stir to combine.  Roll out one of the pie crusts until it is large enough to drape over the sides of a standard 9-inch pie plate.  Roll out the second pie crust, and cut into strips for a lattice, fun shapes to dot the top of the pie, or no shape if you want a standard double-crust pie (just be sure to cut steam vents).  Place the blueberry filling in the first crust, then dot the top with the diced butter.  Place the second crust, however it’s shaped, over the top, and crimp the edges.  Cut away the excess crust – you can bake it separately with cinnamon sugar.

Line the edges of the pie with foil, and bake for about 50 minutes**, until crust is golden brown.  Let the pie cool thoroughly before cutting into it or you’ll have a runny mess like I did.  I like this pie better the second day, after it has chilled in the fridge, but I can never wait that long.

* I have used 4.5 tablespoons both times I made it, and it has been slightly too runny both times.  I like the juiciness of it, though. I’d rather err on the side of juicy than gummy, but feel free to try 6 tablespoons.

** It may take a bit longer with frozen blueberries.